Looking for the marriage of a travelling ancestor? Perhaps our index can help. We’re building up a collection of extracts from parish registers and marriage certificates that we’ll add regularly to this page. So please check back soon. And if you have any to share, please contact us. 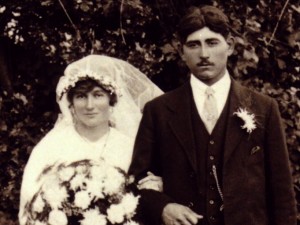 To protect the privacy of individuals, we only publish marriage information from before 1940.

BOSWELL and WOODALL
Knowle, Warwickshire, by Banns, 2 March 1812
Vine Boswell, a Bachelor, of this Hamlet in the Parish of Hampton in Arden
Comfort Woodall, a Spinster, of the same
Both sign X
Witnesses: John Arnold Kimbell and William Eborn [both sign] [Double wedding with the Boswell/Sheriff couple below]

BOSWELL and SHERIFF
Knowle, Warwickshire, by Banns , 2 March 1812
Thomas Boswell, a Bachelor, of this Hamlet in the parish of Hampton in Arden
Patience Sheriff, a Spinster of the same
Both sign X
Witnesses: John Arnold Kimbell and William Eborn [both sign] [Double wedding with the Boswell/Sheriff couple above]

GASKIN and GREEN
From the News of the World, 5 August 1900, page 4
A GIPSY’S WEDDING
A novel wedding took place at Norwich, when some travelling gipsies were married at St. Peter’s Church. The beaming couple drove up in a pair-horse brake, surrounded by about a score of relatives, and including several gorgeously-arrayed babies. The bride, Frances Green, wore a costume of bright blue velvet with cream trimmings, and the bridegroom, Ben Gaskin, was also resplendent in new clothes. Through a storm of rice and confetti, they drove to the encampment, where festivities took place in a huge marquee. There was a monster wedding cake and a large company toasted the married pair in bumpers [sic] of champagne. The gay procession attracted crowds to the streets.

SAUNDERS and HUSSEY
The Register Office, Fareham, Hampshire, 6 June 1916
Charles Saunders/aged 25/Bachelor/Travelling Showman/Sarisbury Green, Sarisbury/son of Walter Saunders (deceased)/Refreshment House Keeper
Mary Hussey/aged 20/Spinster/Sarisbury Green, Sarisbury/father’s name and occupation not given
Charles and Mary both sign X
Witnesses: S. Vennall and W.A.DZ. Osmond [both sign] (The owner of this marriage certificate adds that this is the elopement of Mary Magdalen Hussey and Charles Ayres. Charles’ father Walter Ayres did not die until 1957. Mary’s father died in 1932.)

SHAW and BENNETT
Hawridge, Buckinghamshire, 2 February 1787
Charles Shaw of the parish of Chilvers Coton, in the county of Warwick, bachelor
Hannah Bennett, of this parish, spinster
Married by licence
Charles and Hannah both sign X
Witnesses: Jonathan Sale, James King (Clerk) – both sign