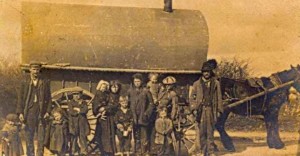 Looking for an ancestor who travelled through the county of Lincolnshire? Perhaps our Lincolnshire Travellers Birth, Marriage and Death Certificates and Parish Register Collection can help.

It’s been inspired by the work of RTFHS member the late Vivienne Halton who in her lifetime collected many references to her own travelling ancestors in Lincolnshire and surrounding counties. Vivienne’s research papers have now been kindly donated to the RTFHS by her widower via RTFHS members Anne Ford and Eric Trudgill, and we are pleased to be able to share this important legacy with others through the medium of the RTFHS website. .

Remember: if you find an entry on this page or our other index pages that interests you, it’s always best to look at the original document to check for accuracy and completeness.

And if you too have any Lincolnshire Traveller birth/baptism, marriage or death/burial references that you’d like to add to this page, please contact us.

PIERCE Isah
Bp 8 May 1888, Wootton, Lincolnshire, son of Largy and Ellie Pierce, of Wootton, Gipsies. Note in the margin in the parish register: “The baptism was that of a child (male) of Gipsies who could neither read nor write. They insisted on the child being called Isah, possibly intended for Isaiah. I was unable to obtain any satisfactory account of the Parents’ name which I have entered as given me by the mother.”

SMITH Mercy
Bp 3 May 1807, Great Ponton, Lincolnshire, daughter of James and Julia Smith. [no other information]