Looking for the death of a travelling ancestor? Perhaps our index can help. We’re building up a collection of extracts from burial registers and death certificates that we’ll add regularly to this page. So please check back soon. And if you have any to share, please contact us. 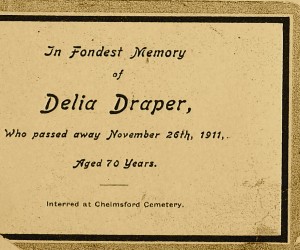 The memorial card of Delia Draper (nee Taylor), the widow of James Draper, who died on 26 November 1911 and is buried in Chelmsford Cemetery, Chelmsford, Essex.

To protect the privacy of individuals, we only publish death and burial information from before 1965.

NO NAME GIVEN
Buried 6 April 1757, All Cannings, Wiltshire, A travelling Boy.

BOSS, Caroline
Buried 16 August 1839, Bedingham, Norfolk, a Gipsy who died in the parish of Bedingham. Aged 50.

BOSWELL, Osery
Derby Daily Telegraph, 30 April 1912
“BAKEWELL GIPSY’S FUNERAL
The funeral of Osery Boswell, aged 100, believed to be the oldest gipsy in the world, formerly an inmate of Bakewell Workhouse, took place at Bakewell Cemetery on Monday. Several of the gipsy clan attended, and the service was of a very simple character. One of the most pathetic figures present was the octogenarian widow, who had to be supported at the grave side.”

BOSWELL, Naomi
The Examiner, 11 March 1838
“At Littleport, Isle of Ely, aged 70, Naomi Boswell, Queen of the Gipsies. She was in the habit of sitting outside the tents since the age of 17, and was found dead by the side of one. A coroner’s jury brought in a verdict of ‘Died from exposure to the inclemancy of the weather.’ ”

BOSWELL, Sarah
Suffolk Chronicle, 12 May 1838
“DEATHS – Last week died , in the Union Hospital, Nottingham, Mrs. Sarah Boswell, aged 93,  the Queen of the Gipsies. Her marriage lines, which were seen at the workhouse, indisputably proved that she was married to the great Boswell, the King of the Gipsies, seventy-two years since.”

BUCKLAND, Peter
Buried 10 June 1809, Shipton-under-Wychwood, Oxfordshire, a Gipsie died in the hamlet of Lineham in the parish of Shipton.

BUNTS, Louisa
Mentioned in the History of Hertfordshire (published 1881) as having been buried in the north-west corner of the churchyard of Ridge, Hertfordshire. Her gravestone reads: “In memory of Louisa Bunts, Who died April 8th 1878. Aged 15 Years.” The book also records: “…under the shelter of a large tree is a pretty grave, covered with choice flowers, which are carefully guarded by wirework. Beneath lies a poor gipsy girl, who died in a caravan at the roadside. Her father pays a local gardener a weekly sum to attend to the grave…”

DRAPER Canary or Conary
Buried 14 September 1806, Stoke Bruerne, Northamptonshire,  wife of William Draper, One of the People Called Gypsies.
[Forename recorded as ‘Canary’ in the Bishops’ Transcripts; ‘Conary’ in the original parish register]

DRAPER, Damon
Buried 15 October 1801, St Mary Northgate, Canterbury, Kent: 45 yrs, Sol [short for ‘soldier’. Canterbury was a garrison city and soldiers and their families were stationed in the Northgate area and routinely used this church]

GASCOIGNE, William
Portsmouth Evening News, 20 March 1897
“William Gascoigne, who was known as the ‘King of the Gipsies’, has died in hospital at Ipswich at the age of 61, from blood poisoning. He was a native of Totham, in Essex, and will be buried at Colchester. He will have a grand gipsy funeral.” [No doubt a member of the East Anglian Gaskin family.]

GRAY, Peter
Buried 18 October 1811, Hatley, Cambridgeshire. A travelling tinker belonging to the parish of Burwell who died in a barn in this parish after a sudden illness.

JOHNSON, Cinderella
Buried 18 April 1904, Ridge, Hertfordshire, aged 2 months. Died in a wagon in Rowley Lane in this parish. The child of a traveller.

LEE, Thomas
Died 5 November 1801 and buried in the churchyard of Ridge, Hertfordshire. The History of Hertfordshire (published 1881) states: “Adjoining the north-west angle of the [church] tower is a stone to Thomas Lee, still traditionally remembered as ‘old gipsey Lee’ who died on 5th December 1801, at the ripe age of  one hundred years.”

LOVALL, Violet
The Leeds Mercury, 30 November 1839
“On the 17th inst.. aged 86, near Wolverhampton, Violet Lovall, said to be queen of the gipsies. This patriarch of her swarthy tribe breathed her last in camp.”

MacPHEE, George
The Leeds Mercury, 9 March 1895
“The oldest travelling gipsy in the North of Scotland, has died, after a few days’ illness. Aged 101”.

SMALL, Kezia
Buried 30 March 1833, Uplyme, Dorset, Grandchild of the above, aged 6 weeks. [Next in register to Jane Small, above.]

SMITH, Abraham
Buried 20 February 1748, West Winch Norfolk: A Stranger. Affidt made by Elizth Bailey.
Monumental inscription on gravestone in churchyard reads: “Here lieth the body of Abraham Smith, who died Feb the 16 1748, aged 60 yrs.”
[An article in the Journal of the Gypsy Lore Society (Third Series, Vol. 25, page 45) suggests that this Abraham Smith aided in the repair of East Winch church, the church in a village close to West Winch, and that he was ‘a gipsy king’]

SMITH Nipton
Hertford Mercury and Reformer, 1 February 1845
“SUDDEN DEATH OF A GIPSY – An inquest was held on Tuesday, before E. Eagles, Esq., at Potton, upon the body of Nipton Smith, who was found dead in a barn attached to the Sun public house. Richard Baxter, the ostler, went to the barn for the purpose of fetching some staples, and there found the deceased lying on a plank with his face downwards. He ran and fetched his master, and they removed the man into a room, and sent for a surgeon, but life was extinct. They found 11s. 5d. in his pockets. Plato Smith, the gipsy, identified the body as that of his son. He parted with him at Guilden Morden. Joseph Keeling, the landlord, deposed that deceased had a half-quarter of gin in the afternoon, and about five o’clock asked witness to allow him to lie down in the barn; he was a little fresh. Witness believed that no person went into the barn after that, until Baxter found him dead. Mr Raynes, surgeon, was of opinion, that deceased died from apoplexy. The jury returned a verdict accordingly.”