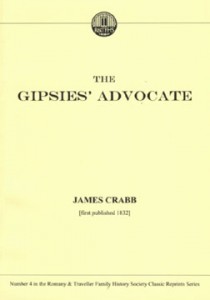 By the Reverend James Crabb

Reprint of the Third Edition, originally published in 1832.

The Reverend James Crabb of Southampton tried to encourage others to join him in his attempts to improve the lives of Gypsies in Britain. Although not named in the book, other than William Stanley the evangelist, there are clues to the identity of some of the people in the Southampton and New Forest areas of Hampshire for whom Crabb provided shelter, education and employment.  If you would like to know what life was like for your Traveller ancestors in the early 1800s, then this is the book to read, particularly if you harbour romantic notions of the ‘carefree’ Romany of bygone days. Life could be harsh – Crabb was motivated after witnessing a Gypsy being condemned to death while his non-Gypsy accomplice was spared the gallows. A5, 98 pages.

Price: £3.00 + UK postage rate C
Go to the RTFHS bookstall at GENfair to order online and pay by card. Or complete this RTFHS Publications Order Form to order by post and pay by Sterling cheque. 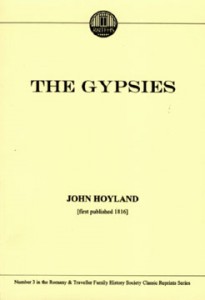 Originally published in 1816, this book is widely recognised as the first full attempt by a British author to examine and report on the history and lifestyle of the Gypsies of Britain. Hoyland (1750-1831) was an eminent and highly respected Yorkshire Quaker who took a pioneering approach to alleviating the lot of his fellow human beings that might be considered ethno-graphic rather than religious. His method was to broadcast a questionnaire and invite interested parties to answer its questions by observing Gypsy families in their locality and gathering in information at first hand from them. Hoyland himself joined in this process by visiting Gypsy encampments.

The result is a largely sympathetic and factual account of the plight of that section of British society that was even then the most discriminated against. It also includes a summary of the history of the diaspora of the Gypsy people from their Indian origins to their arrival in Britain, gleaned from the few sources that were available at the time. A5, 102 pages.

Price: £3.00 + UK postage rate C
Go to the RTFHS bookstall at GENfair to order online and pay by card. Or complete this RTFHS Publications Order Form to order by post and pay by Sterling cheque.

Ordering two or more books in a single order and want to pay by Sterling cheque? Contact us first at sales[at]rtfhs.org.uk to see if we can offer you a combined postage rate.